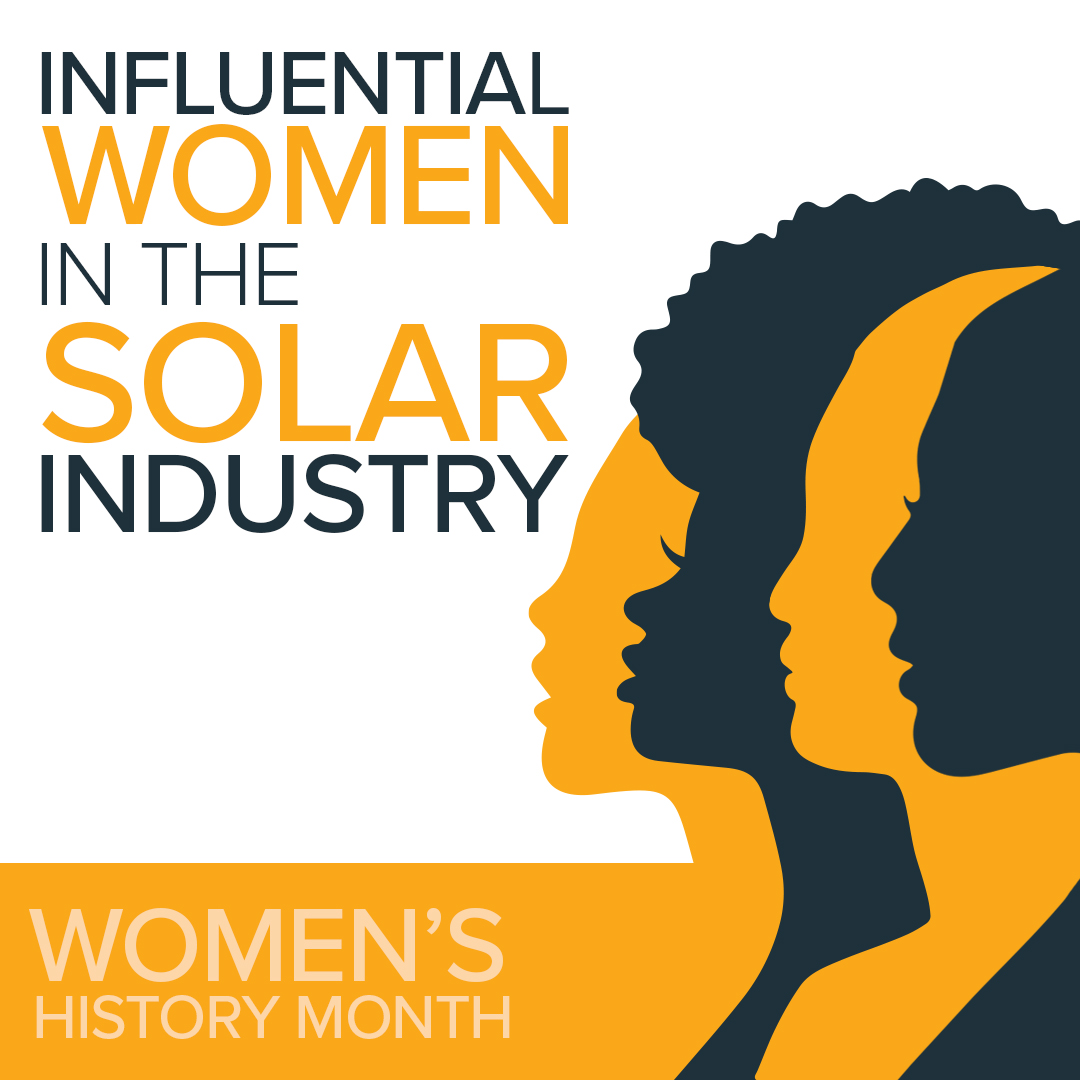 In honor of March being Women’s History Month and March 8th being International women’s day, Vision Solar would like to highlight the ten most influential women throughout the history of solar and their advancements to the solar industry.

Blodgett was an American physicist whose work is considered foundational in the renewable industry—recognized for her invention in 1935 of the color gauge and non-reflecting/invisible glass. In addition, she created solar panels with coatings, enhanced their efficiency, made them water repellent, and used LED and OLED lighting to improve electric conductivity on glass and other substrates. These contributions have furthered the advancements and development of the modern solar panel.

A Hungarian scientist and inventor who lived much of her life in the U.S., Mária Telkes was one of the first solar pioneers among men and women. Her solar thermal storage system invention earned her the nickname “Sun Queen.” This invention was the first solar-powered heating system for residential use. In addition, she is also known for her creation of the solar distiller.

A British–Australian research scientist, Monica Oliphant, started her career in the renewable industry in the ’70s and is best known for her work with solar photovoltaics and advocacy for science and sustainability. Monica Oliphant has influenced the future of energy consumption around the world. Starting as a laser physicist, she is now recognized internationally as a pioneer in solar photovoltaics and renewable energy. To this day, she remains committed to advancing renewable energy by being one of the leaders of the Corena Fund, which supports renewable energy installations in Australia. Additionally, she served as president of the International Solar Energy Society from 2008-to 2009.

Julia is the President and CEO of the solar electric power association, a national non-profit committed to helping members make wise decisions with their solar systems. Consider the Solar Electric Power Association (SEPA) your unbiased resource for information about solar technologies, policies, and programs. Julia has been working with SEPA since 1992 when the organization was Utility Photovoltaic Group, left for a brief period, only to return in 2004 when the organization became what it is today, SEPA.

Eden Full is a young solar innovator who is best known for her invention of the SunSaluter. Her invention is a non-toxic, inexpensive, recyclable device made of metal and bamboo that allows solar panels to track the sun without using a motor. The SunSaluter includes solar panels that rotate to track the sun using mechanical water flow, giving users 40 percent more electricity. Today, her invention provides clean water using solar energy for rural, off-grid communities in 18 countries.

Kristen Nicole is the founder and executive director of WISE, which stands for, Women in Solar Energy, the organization was founded back in 2012. The focus of WISE is to advocate for justice, equality, diversity, and inclusion by providing technical careers for women in the solar industry.

Bernadette Del Chiaro became part of CALSEIA in 2013 after working as the Director of Clean Energy and Global Warming Programs at Environment California. Del Chiaro has been the lead advocate of the “Million Solar Roofs Campaign,” which assisted businesses and communities in installing solar energy systems on one million buildings in 2010. This campaign has created the nation’s most significant solar power investment in history! She also assisted in the Clean Energy L.A. campaign, which successfully established a 20% renewable energy standard for the Los Angeles Department of Water and Power back in 2017.

In 2020, the BBC recognized Iman Ghaleb Al-Hamli as one of the year’s “100 Most Influential Women” for her leadership in developing a solar energy power plant to provide clean electricity for an entire neighborhood in Yemen. This project introduced electricity to 43 families, lifted residents out of poverty, and empowered women by transforming traditional attitudes associated with working and innovative women. She now oversees the management of the system by a team of ten women that are consistently working on renewable energy projects under UNDP, the United Nations Development Programme.

Considered one of the most influential women in solar, she is the first woman to fill the CEO position at SEIA, the Solar Energy Industries Association. As the CEO of SEIA, she oversees all activities, including government affairs, research, communications, and leadership. Her focus is growing the solar industry to the point where a significant percentage of Americans’ energy generation comes from solar. Additionally, she is vocal about tackling challenges women face in the industry since it is considered a male-dominated industry. A quote from one of her interviews with the United States Association, she states how she tackles this issue and is working towards a resolution,

“Throughout my career, I was often the only woman at the table…The goal now is to prevent future generations from facing the same barriers I encountered as a woman in a male-dominated industry.”

“I’ve noticed that unless we make diversity and inclusion a priority and core value, we won’t see changes. We must be intentional about this work.”

The U.S. Senate appointed Jennifer Granholm as our country’s new Energy Secretary in late February 2021. Granholm’s history with the renewable energy industry has been focused on particularly solar, wind, and battery technology, increasing the United States energy independence and helping the American economy buy the creation of well-paying jobs. In addition, she announced her plans to re-introduce a government loan program that will funnel up to $40 billion to qualifying clean-energy projects, including solar, wind, hydro, geothermal, and electric vehicle initiatives.